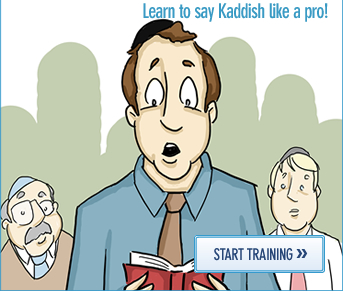 I have a difficult relationship with the prayer, Kaddish Yatom.

When I was younger and learning how to pray Jewishly, I assumed that what I learned about praying Kaddish Yatom was the same for all Jews – that everyone in the congregation stood and recited the words together. As I prayed in communities beyond my own, I learned that this was not the case – that this was a mostly Reform Jewish minhag (custom), and that in most other Ashkenazi communities, only the mourners themselves rose to recite the text. As it happens, the Reform minhag mirrors that of the Sephardi rite, although I imagine this is purely coincidental and that the two practices evolved separately.

Since learning of the difference in methods of praying Kaddish Yatom, my own practice has evolved. Especially since my own Bubby Jeanne passed away, I have come to appreciate the value and personal meaning found in having a specific moment to myself (along with other mourners in the congregation) to honor her memory and pray to God. This was particularly apparent when I was praying at a Conservative shul during shloshim. For three times every morning, for thirty days, during shacharit, I rose to say the words of Kaddish Yatom and praise God in memory of my Bubby. As one of the only people standing in the congregation, I felt as though my words carried a unique gravitas. This wasn’t just something that everyone did because it was the proscribed time in the service, this was a particular responsibility and honor that I had.

The Reform innovation of having the entire congregation rise to say Kaddish along with the mourners evolved out of a desire to have the community unite in support of the bereaved during their difficult time. There is also a minhag that this is an opportunity to say Kaddish for those that have nobody to remember them – particularly those who perished in the shoah. While I appreciate and understand these motivations – and even find myself compelled at certain times to utter the words of Kaddish for these reasons – I find that they ultimately detract from the deeper meaning of this part of our worship.

If one says the Kaddish Yatom every time they pray – even if they are not mourning or observing a yahrtzeit – how is the kavannah of that prayer distinguished from when it is being said specifically in memory of someone who has died? Does this not detract from the gravitas, uniqueness, and separateness (a critical component of the Jewish notion of holiness) of it being used only during times of mourning and memory?

This conception is not foreign to Reform Judaism – elsewhere in our liturgy, there are countless examples of prayers that are used only at specific times to ascribe additional holiness and significance. Yet for some reason, within Reform worship practices, the Kaddish Yatom seems to already hold this level of added import. In virtually every Reform congregation and community I have prayed in, the same scenario plays out upon arriving at the Kaddish Yatom: Faces become somber. The tone of voices change; you can hear the added reverence. This is not a prayer you just say. Elsewhere in the service, distractions may abound, but when it comes to Kaddish, the transformation in attitude among worshipers is palpable. This is a serious prayer. Time to get serious.

Even in so-called creative services in summer camps or youth groups, where there may be a near-complete departure from the more traditional keva of the liturgy, the elevation of the Kaddish Yatom can be observed. Amidst a service abounding with joyous Beatles, Phish, Bob Marley, and Mumford & Sons songs, you can be sure that at some point, the attitude of the prayer leaders will change. A serious look will come over their faces. And the community will be instructed to rise for the Kaddish. You can’t mess with THE Kaddish.

So as I prayed mincha earlier this week at school, I was pleasantly surprised when Ally, our shlicha tzibbur (prayer leader) for the day, instructed the community to remain sitting before Kaddish Yatom. She shared with us that many people in the community had been saying Kaddish particularly for loved ones who had recently died, and that she wanted to give these individuals an opportunity to share their stories and honor their memories aloud before the entire community. One by one, these people rose on their own, told us for whom they were praying Kaddish, shared a person story of their connection, then rejoined the community.

While this was clearly a creative addition to the structure of the mincha service, it was actually very much in keeping with the meaning of Kaddish Yatom. As I saw it, this was an opportunity for individuals to stand and recognize this period of mourning or memory as separate from their ordinary/daily lives, for them to ascribe additional significance and holiness to the prayer at this time of mourning or memory, and afterwards for them to sit down among the community and receive their support.

Sitting, listening to these stories as part of the framing of Kaddish Yatom was incredibly refreshing. For me, it is often challenging to remain sitting during this prayer. Usually I am the only one, or one of a very small minority. I feel different and separate – ironically, the very feelings I look for when I am saying Kaddish for someone in particular.

Ultimately, the kavannah of other worshippers is their own domain, and I’m not making a blanket suggestion that the dominant Reform minhag is wrong. However, I think some significantly meaningful aspects of the prayer for individual worshippers may be lost through the current practice. And while Reform worship styles are generally quite flexible and open to innovation, there is a remarkable level of orthodoxy when it comes to Kaddish Yatom. As a result, most Reform Jews have never been exposed to a different approach to this prayer.

For such a significant part of our life-cycle commemorations, this troubles me. It being a prayer that is held to such serious standards, shouldn’t it merit an equally serious approach in our search for understanding and meaning within our worship?

Postscript: Ironically, as I was searching for some sources for this post, I stumbled across an article with a very similar thesis that was written earlier this year for Reform Judaism Magazine.