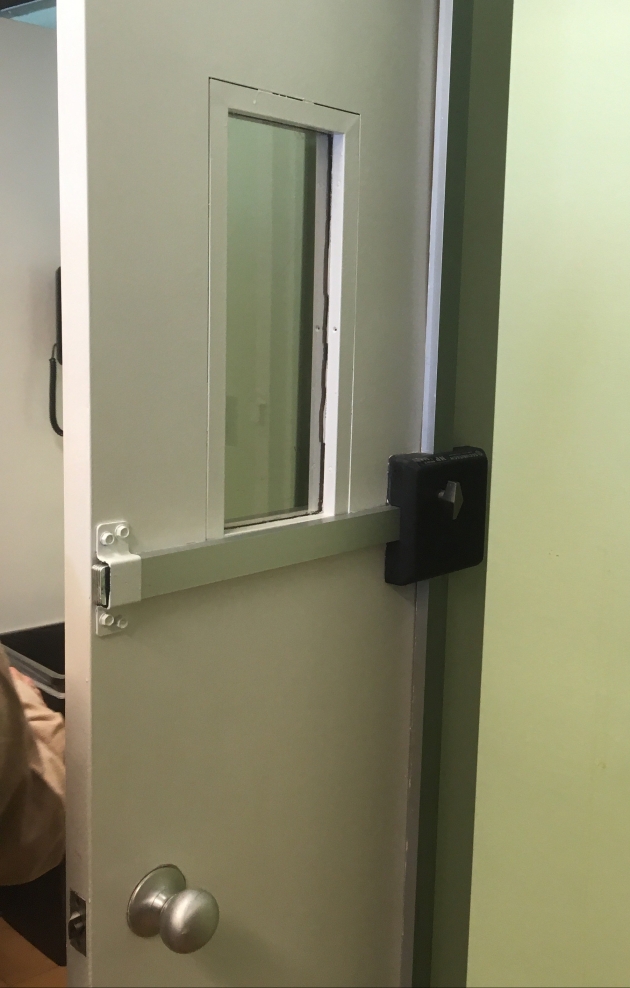 If one day, millennia from now, archaeologists came across the remains of the device shown in the image to the right, I can safely guess that they would probably recognize it as a door. Of course, this assumes that there are no radical advancements in door-design in the coming centuries…

What they might not realize is what kind of room the door opens into.

The elaborate locking mechanism that secures the door might lead them to believe that this door enters into some sort of high-security facility. Or they might think that behind this door is a vault where valuable or sensitive private information is stored. Check out those industrial-reinforced-padlock-style bars that extend in three directions!

Though it’s hard to notice from the angle where I took the photo, if these archaeologists  looked at the window in the door, they would find that it is a shielded, one-way mirror. It works so that if you are standing inside the room, you can see out, but those outside cannot see into the room.

This is a pretty secure door. Whoever built it doesn’t want the people on the outside to be able to open it or see inside without permission. When you look at the door, you also get a sense either that whatever is on the outside is potentially dangerous or terrifying, or that whatever lies inside this door is valuable and needs to be safeguarded.

I came across this door last weekend and was caught off guard by it. You see, the door doesn’t open up into a vault or into a secure facility, or even into a private room of any sort.

It’s a door into a children’s classroom.

Which is to say that my last hypothetical observation was spot on: This door does indeed lead to something valuable that needs to be safeguarded. But the way that it wants to do that safeguarding, quite frankly, terrifies me.

One day, in a more enlightened future, perhaps people will look back upon this door as an artifact of what it meant to be a student in the United States in 2018. Secure. Protected. Safe. But safe at what cost?

The scourge of school shootings in the United States is once again on our minds. It is reassuring – such as it can be – to see that the public consciousness has not faded as quickly as it usually does after such catastrophes. This is thanks, in large part (nearly exclusively), to the thoughtful and inspiring students who refuse to be ignored anymore. Today, students across the country have busted down the doors and walked out of their classes in protest of government inaction on preventing gun violence. These brave students refuse to cower in closets anymore, refuse to see their education as something that needs to be locked up behind industrial-strength doors and shatter-proof windows.

Which is why I can’t get the image of that door out of my mind. On a day when students are literally standing up outside, it represents a stark contrast in how to deal with gun violence – one symbolic of hiding in fear. It ultimately treats the symptom, not the cause. Build a bigger lock and someone will eventually just build a smarter pick. Obviously, there is a middle ground to be found here, and it is sensible to put in places procedures to protect lives, while also advocating policy change.

But at what cost? What do we give up when we build schools that are starting to look more like bunkers, than like places to grow and expand minds?

What story do these doors communicate about how we protect the value of our children? What must it feel like to be a nine or ten-year-old child walking into class each day past this gate? What does it feel like to be a teacher who needs to be trained on how to operate this device? And what does this say about how we construct learning environments?

Some might say that these questions are of little consequence when held up against the need to protect the lives of the most vulnerable. I think this argument does indeed have merit. But it must be weighted appropriately. The link between the design of learning spaces and the quality of the learning that takes place within them is crucial, and so these questions are not without real-world impact.

Seeing that bolted door also terrified me because it counters my own experience of what a classroom looks like. I went to a Montessori school where my classroom literally looked like this (thanks to a great website with photos of the very class I learned in from 1993-1995:)

Walls of floor-to-ceiling windows in between classrooms meant that I could see not only what my classmates were learning, but also the learning going on in the three adjacent rooms. It was at-times distracting, but ultimately created a learning environment with a sense of wonder and communal identity.

On the door to our classroom was a one-way-window, but it was constructed exactly opposite to the secure door from above. This meant that if the door was closed, parents, teachers, and guests could still peer into the room and observe the learning taking place, without disturbing us inside. The entire learning space was constructed to enhance the intellectual, and emotional development of the learners.

You can tell which one I believe to be more ideal.

Some may accuse me of naïveté, or of ignoring the real-world implications of what it means to be responsible for the health and safety of students in 2018. Of course, my reflection here is also coloured by the fact that I am Canadian and reflecting on my education in Canada, and comparing it – perhaps unfairly – to the United States.

Perhaps if I was a parent of a child in a classroom in the United States, I would think very differently about this. Perhaps if I was constantly living in fear of sending my child off to school, I would be a vociferous advocate for thicker doors and stronger locks.

But the questions lingering in my mind don’t go away, and I don’t think they should. At what point does the fort-ification of learning spaces prevent the fortifying of minds? At what point do we sacrifice the emotional well-being of our students in the very name of protecting them from emotional harm?

I don’t own the answers to these questions. But as someone who grew up learning in a window-filled, open learning space, it is difficult for me to imagine what it must be like – for students, teachers, and parents – to pass by such barriers, when entering the very spaces that are meant to open hearts and minds.