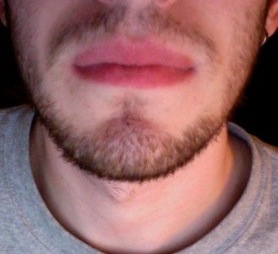 It’s been two weeks since I’ve shaved. The itchy, irritating, and ever-growing mound of hair protruding from my face is starting to get annoying. Friends at work are asking about it, and I’m starting to get stared at on the subway. That means something in New York. And let me just say at this point that necks should not be allowed to sprout hair; it’s more than a minor inconvenience. It’s weird.

Some have asked if my folicular growth experiment is an homage to my country’s national sport and its related superstitions at this time of year. No, it’s not. I wish it were, though. On Monday night, I was asked by one of my youth groupers if I was just trying to fit in more at a concert I’ll be seeing in June. I laughed.

So the beard growth – for those who aren’t familiar with the Jewish obsession with hair – is one of the customs related to the Counting of the Omer. I’ll say flat out at this point that I’m not mourning any ancient plague or series of destructions. That’s not why I’m growing out the beard. I’m not mourning. I listen to music during these 49 days, and I continute to be a generally happy person. Although there wasn’t a new LOST tonight. That’s a downer.

The reason I let my hair grow is that it is a physical, bodily, intimate symbol of my being a Jew (intentional use of the Present Active Participle form of the verb “to be” ). For 49 days, part of my physical being exudes Jewishness. It’s more than wearing a kippah. It’s something I can’t just take off. Now as a Jewish male, part of my physical being always exudes Jewishness… but I didn’t have any choice regarding whatever was exuded 8 days after I was born. During this time period, I make the active choice to be present with my Judaism.

What’s it really all about?

For whatever reason you choose to buy into, ultimately our ancestors decided that this was a time period when people shouldn’t be engaging in celebratory actions (read: don’t shave, because we don’t shave when we’re mourning, and if we’re not celebrating, then we’re morning). My personal favourite reason for not celebrating at this time is that the period between Pesach and Shavuot comes at the time leading up to the grain harvest in Israel. Our ancestors’ lived a deeply agrarian lifestyle, and their livelyhood and existence was entirely dependent upon the grain harvest. Not wanting to jinx anything or count their sheaves before they hatched, they treaded lightly – avoiding any early celebrations, and going so far as to adopt tribal mourning customs.

So today – in this time – while I can celebrate that Trader Joe’s was not as busy as I thought it would be today and I could harvest me some kickass Mexican avocados, I can also remember that this was not always the case. In fact, for most of our history it was the exact opposite. We were dependent upon the seasons and the rainfall and the dew and the sun and the power of God, and we knew we had to be mindful of that. Time has changed…

Judaism is a religion with practices deeply intertwined with the space-time continuum; a religion that understands that the laws of nature and the laws of physics are part of the laws of halachah. Allow me to wax cliche: “A season is set for everything, a time for every experience under heaven” (Kohelet 3:1). Cliches are cliches for a reason; they’re often truisms, too. While Steven Hawking, Albert Einstein, Abraham Joshua Heschel, and Pete Seeger discover the quirks of time, it’s God who ordains them. And those are some d(D)udes you don’t want to mess with. I may not understand the mechanics of time, or know how to till the soil, but I am able to say “for this time, in this place, I am and will be reminded of the essence of my Jewishness. I can take 49 days and remember that Judaism is a religion that accesses God through the creation of the Earth, and through the experience of time.

That may sound hokey or hippie or maybe even Buddhist. Sure, I’m Jewish and always will be. It’s part of my essence, and I don’t really need to be reminded of that everyday. But it’s nice to physicalize the essential every now and then. How often to we get a chance to internalize and externalize at the same time? As my wise friend, Andy, is currently relaying to me through instant messenger: “We’re too settled in our world of technology, too desensitized. At the end of the day, I think people just need to take a moment to say “damn.'”

I’ve got an itchy beard.